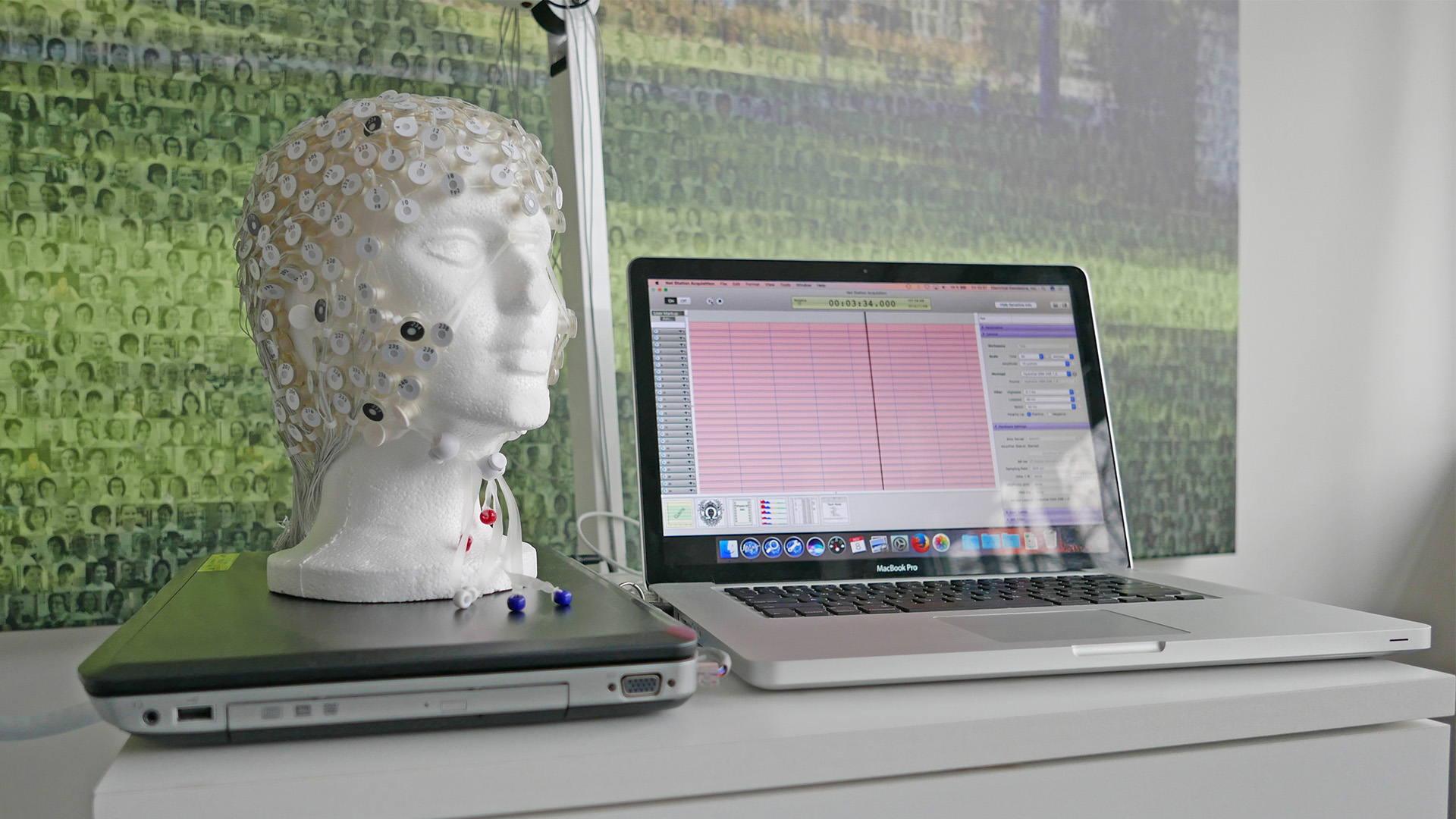 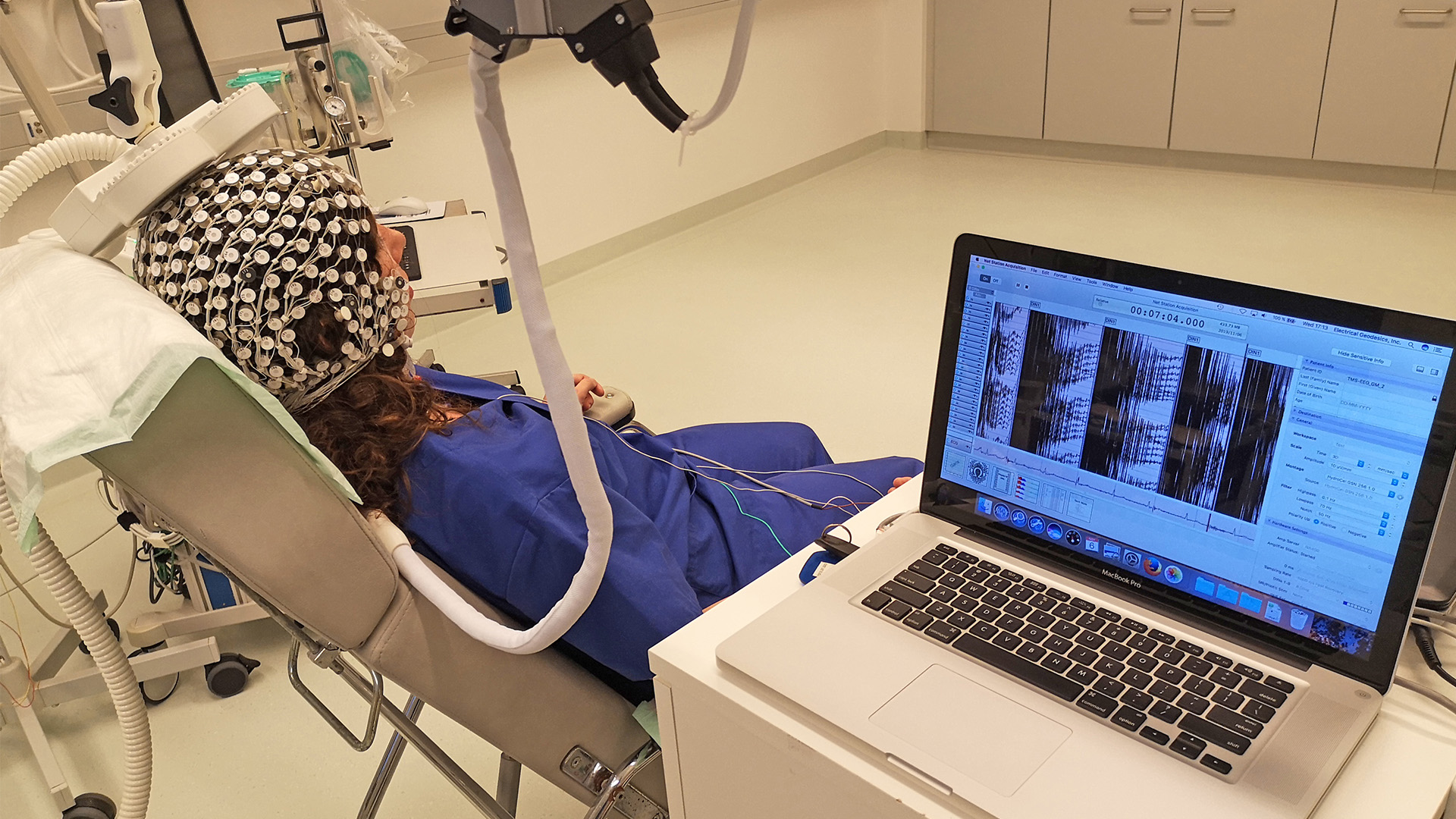 OBJECTIVE: The aim of this study was to analyse immediate responses to individual
dialogic music therapy (IDMT) of patients with unresponsive wakefulness syndrome
(UWS) and individuals in a minimally conscious state (MCS) and to develop an
assessment tool for IDMT.

METHODS: Seven patients were subjected to three conditions: (1) sounds and
stimuli of the daily environment immediately before IDMT, (2) specific
improvisational music therapy intended to establish a dialogue with the patient

(IDMT) and (3) sounds and stimuli of the daily environment immediately after
IDMT. Video recordings were analysed by six independent assessors using ‘Music
Therapy in a Vegetative or Minimally Conscious State (MUVES)’, an assessment tool
developed in this study. Diagnosis of UWS or MCS was established using the coma
recovery scale-revised (CRS-R).

We investigated differences of EEG coherence within (short-range), and between
(long-range) specified brain areas as diagnostic markers for different states in
disorders of consciousness (DOC), and their predictive value for recovery from
unresponsive wakefulness syndrome (UWS). EEGs of 73 patients and 24 controls were
recorded and coma recovery scale- revised (CRS-R) scores were assessed. CRS-R of UWS patients was collected after 12 months and divided into two groups
(improved/unimproved). Frontal, parietal, fronto-parietal, fronto-temporal, and
fronto-occipital coherence was computed, as well as EEG power over frontal,
parietal, occipital, and temporal areas. Minimally conscious patients (MCS) and
UWS patients could not be differentiated based on their coherence patterns or on
EEG power. Fronto-parietal and parietal coherence could positively predict
improvement of UWS patients, i.e. recovery from UWS to MCS. Parietal coherence
was significantly higher in delta and theta frequencies in the improved group, as
well as the coherence between frontal and parietal regions in delta, theta,
alpha, and beta frequencies. High parietal delta and theta, and high
fronto-parietal theta and alpha coherence appear to provide strong early evidence
for recovery from UWS with high predictive sensitivity and specificity. Short and
long-range coherence can have a diagnostic value in the prognosis of recovery
from UWS.

Creatine for neuroprotection in neurodegenerative disease: end of story?

Creatine (Cr) is a natural compound that plays an important role in cellular
energy homeostasis. In addition, it ameliorates oxidative stress, glutamatergic
excitotoxicity, and apoptosis in vitro as well as in vivo. Since these
pathomechanisms are implicated to play a role in several neurodegenerative
diseases, Cr supplementation as a neuroprotective strategy has received a lot of
attention with several positive animal studies in models of Parkinson’s disease
(PD), Huntington’s disease (HD), and amyotrophic lateral sclerosis (ALS). This
has led to a number of randomized clinical trials (RCT) with oral Cr
supplementation, with durations up to 5 years. In this paper, we review the
evidence and consequences stemming from these trials. In the case of PD, the
initial phase II RCT was promising and led to a large and well-designed phase III
trial, which, however, turned out to be negative for all outcome measures. None
of the RCTs that have examined effects of Cr in ALS patients showed any clinical
benefit. In HD, Cr in high doses (up to 30 g/day) was shown to slow down brain
atrophy in premanifest Huntingtin mutation carriers. In spite of this, proof is
still lacking that Cr can also have beneficial clinical effects in this group of
patients, who will go on to develop HD symptoms. Taken together, the use of Cr
supplementation ha so far proved disappointing in clinical studies with a number
of symptomatic neurodegenerative diseases.

Hypoxia and Outcome Prediction in Early-Stage Coma (Project HOPE): an

BACKGROUND: The number of resuscitated cardiac arrest patients suffering from
anoxic-ischemic encephalopathy is considerable. However, outcome prediction
parameters such as somatosensory evoked potentials need revision because they are
based on data predating the implementation of mild therapeutical hypothermia and
because data from our own laboratory suggest that they may fail to predict
prognosis accurately. The present research project “Hypoxia and Outcome
Prediction in Early-Stage Coma” is an ongoing observational prospective cohort
study that aims to improve outcome prediction in anoxic coma by limiting the
effects of falsely pessimistic predictions at the intensive care unit.

METHODS: Our outcome analysis is based on functional and behavioural definitions.
This implies the analysis of the positive predictive value of prognostic markers
yielding either positive or negative results. We also analyse the effect of
covariates adjusted for age and sex such as sociodemographic variables,
prognostic variables and treatment factors on functional and behavioural
outcomes, with mixed effects regression models (i.e. fixed and random effects).
We expect to enrol 172 patients based on the result of previous research. The
null hypothesis is that there is a probability of
will be observed despite the presence of any of the predictors of a poor/negative
outcome. We test the null hypothesis against a one-sided alternative using a
Simon’s two-stage design to determine whether it is warranted to recruit the full
number of patients suggested by a power analysis. The second stage has a design
with a Type I error rate of 0.05 and 80 % power if the true response rate is
25 %.

DISCUSSION: We aim to make a significant contribution to the revision and
improvement of current outcome prediction methods in anoxic-ischemic
encephalopathy patients. As a result, neurocritical care specialists worldwide
will have considerably more accurate methods for prognosticating the outcome of
anoxic-ischemic encephalopathy following cardiac arrest. This will facilitate the
provision of treatment tailored to individual patients and the attainment of an
optimal quality of life. It will also inform the decision to withdraw treatment
with a level of accuracy never seen before in the field.
TRIAL REGISTRATION: ClinicalTrials.gov NCT02231060 (registered 29 August 2014).

BACKGROUND: Acute brain damage can cause major disturbances of consciousness,
ranging all the way to the persistent vegetative state (PVS), which is also known
as “unresponsive wakefulness syndrome”. PVS can be hard to distinguish from a
state of minimal preserved consciousness (“minimally conscious state,” MCS); the
rate of misdiagnosis is high and has been estimated at 37-43%. In contrast, PVS
is easily distinguished from brain death. We discuss the various diagnostic
techniques that can be used to determine whether a patient is minimally conscious
or in a persistent vegetative state.

METHODS: This article is based on a systematic review of pertinent literature and
on a quantitative meta-analysis of the sensitivity and specificity of new
diagnostic methods for the minimally conscious state.
RESULTS: We identified and evaluated 20 clinical studies involving a total of 906
patients with either PVS or MCS. The reported sensitivities and specificities of
the various techniques used to diagnose MCS vary widely. The sensitivity and
specificity of functional MRI-based techniques are 44% and 67%, respectively
(with corresponding 95% confidence intervals of 19%-72% and 55%-77%); those of
quantitative EEG are 90% and 80%, respectively (95% CI, 69%-97% and 66%-90%).
EEG, event-related potentials, and imaging studies can also aid in
prognostication. Contrary to prior assumptions, 10% to 24% of patients in PVS can
regain consciousness, sometimes years after the event, but only with marked
functional impairment.

CONCLUSION: The basic diagnostic evaluation for differentiating PVS from MCS
consists of a standardized clinical examination. In the future, modern diagnostic
techniques may help identify patients who are in a subclinical minimally
conscious state.

Diagnosis and decision making for patients with disorders of consciousness: a
survey among family members.

OBJECTIVES: To examine the perceptions of family members of patients with
disorders of consciousness (DOC) in regard to the patients’ level of
consciousness, communicative status, and prognosis as compared with the objective
medical categories, and to elicit the family members’ self-reported practice of
treatment decision-making.

INTERVENTION: Not applicable.
MAIN OUTCOME MEASURES: Perception of level of consciousness as compared with the
medical diagnosis; assessment of communicative status and prognosis; and practice
of treatment decision-making.

RESULTS: The study included 44 family members of patients, most of whom had
sustained global cerebral ischemia. Six months after brain injury, 36% were in a
vegetative state (VS), 20% were in a minimally conscious state (MCS), and 39% had
emerged from an MCS. In 76% of cases, the relatives assumed the same level of
consciousness that diagnostic tests showed. In the other cases, consciousness was
mostly underestimated. While relatives of patients in a VS, and to a lesser
extent of those in an MCS, were more skeptical about the patients’ chances to
advance to an independent life, all had high hopes that the patients would regain
the ability to communicate. Yet, 59% of family members had thought about limiting
life-sustaining treatment. Most of them base treatment decisions on the patient’s
well-being; very few relied on previously expressed patient wishes.

CONCLUSIONS: According to our sample, family members of patients with DOC largely
assess the level of consciousness correctly and express high hopes to reestablish
communication with the patient.

Patients with unresponsive wakefulness syndrome (UWS) or in minimally conscious
state (MCS) after brain injury show significant fluctuations in their behavioural
abilities over time. As the importance of event-related potentials (ERPs) in the
detection of traces of consciousness increases, we investigated the retest
reliability of ERPs with repeated tests at four different time points. Twelve
healthy controls and 12 inpatients (8 UWS, 4 MCS; 6 traumatic, 6 non-traumatic)
were tested twice a day (morning, afternoon) for 2 days with an auditory oddball
task. ERPs were recorded with a 256-channel-EEG system, and correlated with
behavioural test scores in the Coma Recovery Scale-revised (CRS-R). The number of
identifiable P300 responses varied between zero and four in both groups.

Reliabilities varied between Krippendorff’s α = 0.43 for within-day comparison,
and α = 0.25 for between-day comparison in the patient group. Retest reliability
was strong for the CRS-R scores for all comparisons (α = 0.83-0.95). The
stability of auditory information processing in patients with disorders of
consciousness is the basis for other, even more demanding tasks and cognitive
potentials. The relatively low ERP-retest reliability suggests that it is
necessary to perform repeated tests, especially when probing for consciousness
with ERPs. A single negative ERP test result may be mistaken for proof that a UWS
patient truly is unresponsive.

CONCLUSIONS: Even several years after severe acute brain injury, an ICF-oriented
IRP can lead to ADL improvements and achievement of specific goals. If confirmed
by prospective trials, this strategy should be incorporated in healthcare
systems.